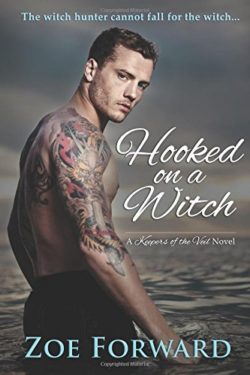 Jason Merck is an Enforcer, a supernatural witch hunter who strikes down anyone practicing black or death magic. He dreads his judgement day before the Greek gods. Merck resents them for their meddling in his life. He rescues Shannon Randolph, a girl from his past, from a kidnapping plot. Merck discovers his destiny is somehow intertwined with Shannon’s, so he agrees to help her search for Poseidon’s trident. Can Merck and Shannon find the trident before their time runs out? Will he be able to protect her from supernatural threats?

Shannon Randolph use to work as a contract camerawoman until her mother’s untimely death. She now assumes the head position of the six Pleiades witches, human female descendants of the seven Pleiades Greek goddesses. Shannon must find Poseidon’s trident before the angry Greek water god delivers on his promise. When Jason Merck comes to her rescue, she decides to enlist his help on the search. Will Shannon find the trident in time to save her fellow witch sisters?

Jason Merck reminds me of a grown-up, tattooed, bad-boy version of the movie-character Percy Jackson. The suffocating darkness of his thankless duty wears on his soul, yet he resolutely continues to police the magical denizens by himself. I understand Merck’s reasons for not settling down, preferring to keep all innocent bystanders from becoming potential targets against him. But what I adore the most about Merck is despite his numbered days, he still aided Shannon in her desperate search for Poseidon’s trident.

Shannon has this infectious manner about her I enjoy. She is equal parts feisty and determined. I admire Shannon’s ability to ask her friends for help, especially on her weak points in magic instead of trying to hazard it out. Shannon may not have wanted her mother’s position; however, that does not stop her from doing the best with what is at her disposal. I love her willingness to walk the gauntlet for the people who look to her for leadership. But what I like the most about Shannon is her refusal to allow overprotective alphas to deter her from the mission set before her.

HOOKED ON A WITCH is book four in Zoe Forward’s paranormal series, KEEPERS OF THE VALE. Zoe Forward is a new-to-me author, so sadly I have not read the three previous books, something I may have to rectify soon. Although I expected the story to be more of an “enemies-to-lovers” trope than a “second-chance” theme, it did not stop me from enjoying the book.

HOOKED ON A WITCH is an entertaining and spellbinding tale of two destined soul-mates overcoming incredible supernatural odds. I love how I learned about some new and interesting mythological creatures from this story. I cannot wait to see what’s next in future installments.