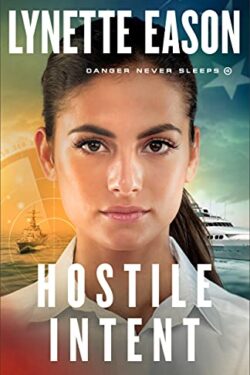 HOSTILE INTENT by Lynette Eason is an action-packed, inspirational suspense, and book four of the Danger Never Sleeps series.

Ava Jackson took an early discharge from the Navy after her mother became terminally ill. After visiting her mother at the nursing home, she’s attacked. Caden Denning, Special Agent for the FBI, arrives just in time to help her fight off her attacker.

Caden believes Ava can help him capture a serial killer that he believes is linked to her father, who died eight months earlier. Ava will do anything to help stop the killer and to spend time with Caden, the boy she’s had a major crush since childhood. As they grow closer, the killer is breathing down their necks.

This book is a page-turner that I couldn’t put down, but one thing drew me out of the story again and again. Ava’s life was at risk because of her father, but not her mother and brother, and they weren’t even considered in danger until almost a hundred pages in. It frustrated me so much that I have to give it a four instead of a five star rating.