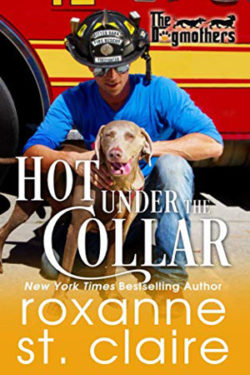 Firefighter Braden Mahoney is the Dogfather’s nephew. He dreams of helping his fire department by becoming an arson dog handler. However, Braden’s canine partner fails the most crucial tests. He turns to Cassie to help organize a fundraiser to cover the cost of Jelly Bean’s specialized training. Neither Braden nor Cassie want a permanent relationship. What sacrifices is Braden willing to make for Cassie? Can Jelly Bean become an arson dog? Or will Braden have to give up on him?

Cassie Santorini is an event coordinator for Bitter Bark, North Carolina. She intends to move to a big city and pursue her dream life. Cassie is not about to let anyone, especially a smart and sexy firefighter, stand in her way. She agrees to help Brandon organize a scavenger hunt fundraiser before she leaves. When her Greek grandmother moves into town, Cassie distrusts the woman’s motives. Can Cassie thwart her grandmother’s machinations? Or will Braden tempt her to remain in Bitter Bark?

Braden is just as dreamy as his Kilcannon cousins. I love how he and his brothers honor their deceased father by following in his footsteps. They understand and accept the dangers involved in being a firefighter. I like how Braden turned to books for solace. They offered him a healthy way to deal and overcome his grief. What I adore the most about Braden is how he encourages Cassie to chase after her dream. He doesn’t want her to regret not following it to the end.

Cassie is an admirable woman. She is the type of person who faces a problem head on until a suitable solution presents itself. I like that about her personality. I admire Cassie’s unfaltering determination in achieving her dream. She refuses to allow anyone or anything to derail her carefully laid-out plans. What I like the most about Cassie is her ability to gauge Braden’s emotions. She acts accordingly to what she senses he needs.

HOT UNDER THE COLLAR is book one in Roxanne St. Claire’s brand new canine series, THE DOGMOTHERS, a fun spin-off from her DOGFATHER series. I adore that Gramma Finnie and Yiayia Santorini assume the Dogfather’s matchmaking endeavor. The two women may be polar opposites in both temperament and heritage; however, they share one thing in common: wanting their single grandchildren settled and happy. Being a dachshund mother, I love the fact that Yiayia has two doxies.

HOT UNDER THE COLLAR is a heartwarming continuation to a fun and sweet series. I am glad this is not the last we see of the Kilcannon, Santorini, and the Mahoney clans. I cannot wait to see who the Dogmothers plan to match-make next.