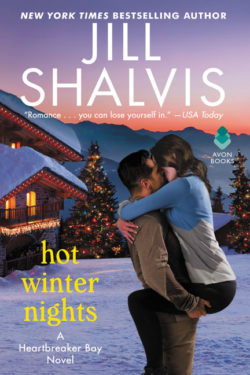 Molly Malone is the office manager at Hunt Investigations. She craves more than mere office work, desperate to move onto the investigation field. Being a bit naughty, Molly pranks Lucas, a fellow co-worker and secret crush, into believing they had a one-night stand together. She agrees to take on her neighbor’s Bad Santa case behind her boss’s back. Molly understands the importance of having a partner watch her back, so she convinces Lucas to help on the case. Their attraction escalates during the investigation. Can Molly prove she is ready for investigation work? Or will she lose more than just her heart on the case?

Lucas Knight works as an investigator at Hunt Investigations. He is on temporary leave due to an injury on his last assignment. Lucas learns the hard way that alcohol and pain medication do not mix, especially when he wakes to find Molly in his bed and no memory of the night before. If that is not bad enough, his boss assigns Lucas to assist Molly on her secret case. Mentally, he knows she is off limits; however, he cannot help but act on their mutual attraction. Can Lucas keep Molly from getting hurt on her first case?

Molly is such an admirable character. She refuses to allow her physical handicap to deter her from achieving her goals. I adore how Molly holds her own around the big, bad alphas at her workplace. Working alongside them, she has learned how to easily maneuver around their protective and high-handed tendencies. What I like most about Molly is her caring and thoughtful nature. She noticed Lucas not being himself and helped him instead of letting him be. Also, she willingly helped her neighbor when everyone else declined.

I fell in love with Lucas instantly. He is no stranger to the heartache that loss brings, which causes him to be reluctant to open his heart to another again. I admire Lucas’s restraint from prying into Molly’s privacy. As badly as he wanted to learn about her handicap, Lucas refrained until Molly was ready to tell him herself. What I love most about Lucas is how he bolstered Molly’s confidence on her first case. He recognized and acknowledged her capability to handle herself during an investigation.

HOT WINTER NIGHTS is book six in Jill Shalvis’ contemporary-romance series, HEARTBREAKER BAY. I have not read the prior five books, unfortunately, something I plan to rectify when I can. However, that did not interfere in following the story’s plot and storyline. I like that the Christmas element was not the main theme but a backdrop.

HOT WINTER NIGHTS is a quirky tale of two openly caring and emotionally stunted people learning to open their hearts again. I love how this story reads more like a romantic suspense than the author’s usual witty and fun contemporaries. I hope Sadie and Caleb’s book is next.