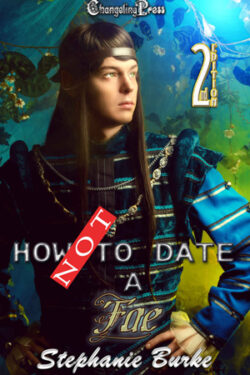 Ario was cast out of his home and his family but has managed to build a nice life for himself. He’s far away from his old life and happy alone in his forest. No magic, no stress, no fuss – until he meets a pixy named Merrick. Merrick drags him to a strange room full of what Ario thinks are corpses. When a muscular red-head awakens, Merrick instructs Ario to take the red-head home.

Cailte mac Ronan was part of the Finnian army. His troop took their final rest in 460, so when he awakens in 2010, he’s more than shocked, especially when he awakens in the home of a sexy male. Getting used to new world amenities is the least of his worries when Ario’s past comes calling and all Cailte can think of is protecting what is now his.

HOW NOT TO DATE A FAE is a M/M paranormal romance novella. The story is compelling and kept me engaged. The romance is a bit quick but sweet and steamy without being explicit. The author provided ample backstory on the familial conflict allowing the reader to understand why Ario was alone in the world. Her conflict resolution included suspense and I was anxious to see how everything ended. The story does seem rushed in places and some of the dialogue is choppy and doesn’t read conversationally. Otherwise, the story is unique with a decent plot and likable characters. I look forward to reading about the next character not to date.