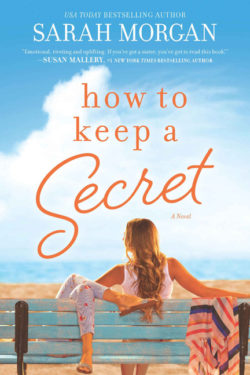 HOW TO KEEP A SECRET takes us from London to Martha’s Vineyard in the United States, where Lauren grew up, and her family and first love still live. There are many secrets in the book and several bombshells revealed as a result. I liked the way applicable words and their definitions from Jenna, Lauren’s sister, were added throughout the story or at the beginning of a chapter.

When Lauren and her daughter Mack have their lives upended due to the death of Lauren’s husband (Mack’s father) things just keep getting worse. Sullen teen Mack reveals a secret during Ed’s funeral, and things take off from there.

When Lauren and Mack travel to Martha’s Vineyard to regroup and start their lives over, Lauren doesn’t have much hope since she and her mother have never really gotten along. They never discuss anything personal or of substance. Lauren and Mack’s relationship has deteriorated as well, which adds another layer of angst. When Lauren finds Scott still lives there after they split sixteen years before, she doesn’t know what to think.

There are many plots within the story that tie nicely together. The descriptions of the land and the homes were breathtaking and made me feel like I was there. As the story flows, we get to know the characters and watch their relationships grow. They heal as they each start to find the support they need and even learn more about each other. I was caught up in the book from the beginning to the end. Though the story resolves well enough, there are still some loose ends. There’s the possibility of many happily-ever-afters to come!