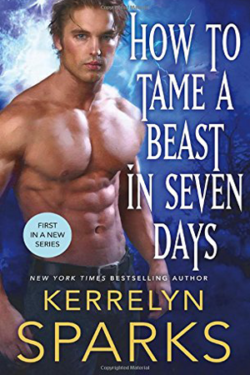 Imagine a world filled with with castles, shape shifters, dragons, kings, ghosts, and magic. HOW TO TAME A BEAST IN SEVEN DAYS by Kerrelyn Sparks introduces us to the world of Aerthlan, where kingdoms are at war. Four of the kingdoms on the continent worship a male god and will put to death anyone who denies their god. The call themselves The Enlightened.

The fifth kingdom is more tolerant and allows for the worship of gods and goddesses. Twice a year, the two moons of Aerthlan align, and children born during this alignment are gifted with a supernatural ability. They are referred to as The Embraced. These children must be kept hidden because the kings on the continent are afraid of anyone with more power than them and will not allow them to live. They are taken to the fifth kingdom for protection.

Luciana spent her life growing up in a convent. She has the ability to see and speak with the dead. Believing she was an orphan, she is surprised to learn her father has arrived to bring her home. She is to marry a man, or rather, her identical twin sister whom she never knew existed is to marry a man as ordered by the king. If there is no marriage, her father will be killed and his lands will be taken. Fearing for the safety of her father and those who live on his lands, she pretends to be her sister and agrees to marriage with a stranger.

Lord Protector of the Realm, Leofric (Leo) of Benwick, is one of The Enlightened. He has the ability to harness lightening. When a storm arrives, lightning seems to seek him out, striking him, filling him with power. This power allows him to shoot bolts from his fingers, but if he is not gloved, his touch can kill a person instantly. Although he is one of The Enlightened, he was never protected. His uncle is one of the four warring kings. Fearing Leo’s ability, the King has been trying to have him killed, unsuccessfully, for years. People fear Leo because of his power and refer to him as The Beast. He is so lonely. He craves human contact but knows it can never happen and will result in death.

Luciana and Leo are on a journey where they are targeted by assassins and befriended by ghosts. While on this journey, Leo begins to realize Luciana is not what she seems. Could she be one of The Enlightened? The more time they spend together, the more he realizes she is special and begins to dream of a future with her. Will she ever be able to tolerate his touch?

I am not normally a reader of this type of paranormal fantasy, but I was under the spell of this story before I realized it. I found it enchanting and fell in love with this world created by Kerrelyn Sparks, which is filled with magic, mystery, mayhem, and love. I highly recommend this book.