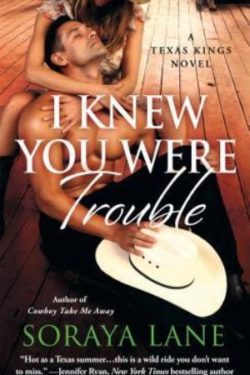 When life as Faith knows it implodes she runs to the one person she knows she can trust to help her – her brother Sam’s best friend, Nate King.   She’s in desperate need of a place to stay and a job and Nate has extra rooms plus he needs a housekeeper.  If he agrees to hire her Faith won’t have to turn to her brother for help; which she sees as a huge bonus.  This sort of living arrangement will come with some hefty complications however since there’s an undeniable attraction between Faith and Nate and he’s been expressly forbidden to even consider making a move on his best friend’s baby sister.  Throw in Nate’s ailing grandfather’s failing health and his concerns regarding his brothers’ reactions to Clay’s final wishes and it’s going to be a bumpy ride, but one well worth taking.

I’ve gotta admit, I’m more than a little bummed to be saying goodbye to the King brothers. Soraya Lane pulled me into their lives and with each new release I become more vested in them.  I’ve loved reading about their escapades, their loves, sorrows, betrayals, and interests.  With the last release, I KNEW YOU WERE TROUBLE readers get to delve into the romance between eldest brother Nate and his best friend’s sister, Faith and snicker our way through their drama filled encounters.  Faith might have gotten herself into a muck of a relationship with her ex but there’s no doubt she’s an intelligent, capable woman – just lacking in self-esteem when it comes to lovemaking.  Fortunately Nate has it in spades and is more than willing to use his knowledge and experience to help Faith gain some when she requests it (there, of course, is no ulterior motive here, right?).

I think the thing I loved most about this series is Grandpa Clay. He raised the King brothers and proves himself to be a wise old man when it comes to their well-being and love lives.  It just seems there’s so much life to him and it’s obvious how much the brothers respect him throughout the series so it’s heartbreaking to read the book knowing that he won’t be with them much longer.

I KNEW YOU WERE TROUBLE is a fun, endearing yet heartbreaking read that kept me eagerly turning pages just waiting to see how everything works out for Faith and Nate. It’s a romance so naturally I expected there to be a happily ever after at some point but there’s so much drama with the two of them that I sometimes wondered if they’d ever realize that they belong together – and not just for sexual gratification.

Here are the titles in the TEXAS KINGS trilogy in order (and no, you don’t have to read them in order) :

COWBOY TAKE ME AWAY

I KNEW YOU WERE TROUBLE