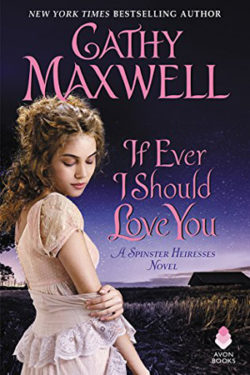 IF EVER I SHOULD LOVE YOU by Cathy Maxwell is the first installment of her new Spinster Heiresses.

Leonie Charnock, one of the season’s “Spinster Heiresses,” has a problem, a drinking problem. Mind you, this is in 1813, when such things as alcoholism were not openly discussed.

When she was 17 years old, a terrible thing happened to Leonie. I prefer for the reader to find out what this was by reading the story, so I won’t mention the event. Leonie never recovered from the event emotionally and turned to drinking to hide her pain.

She is a closet alcoholic. Her struggles are handled by the author in a sensitive and real way. She must learn to fight her cravings.

As it turns out, the Earl of Rochadale remembers Leonie from that fateful day when she was seventeen. Roman is an earl in name only, his predecessor having run the bank account out and leaving a run-down Manor house.

Roman spots beautiful Leonie at the ball and sets his sights on her. They had met years earlier when Roman had saved the dark-eyed beauty’s reputation, destroying his military career in the process.

Leonie finally gives in and agrees to marry Roman, but there will be “no bedding.” She doesn’t want to be anyone’s wife.

This couple have lots of obstacles to overcome. The drinking problem is handled delicately, and I found myself rooting for Leonie to overcome this problem.

This book was a different sort of read. The heroine was vulnerable and not perfect and dealing with her demons. But she has the perseverance to keep trying to be a better person. So too does the man who strives to love her.

I would recommend IF EVER I SHOULD LOVE YOU to all romance readers because it showed that life is full of twists and turns, ups and downs, but with love you can get through anything.