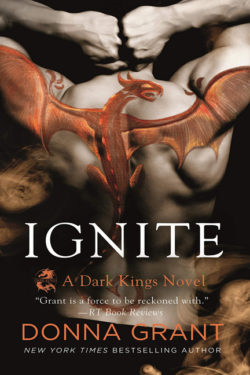 Claire works as a nurse at her best friend’s clinic in a Scottish village outside of Dreagan. She has two secrets that she never revealed to anyone. Claire refuses to allow her dating flops to discourage her from finding The One. She discovers a kindred spirit with Vlad. Can Claire handle the trials of being a Dragon King’s mate? What role will she play with Vlad’s sword?

Vlad, known as V, is the Dragon King of the Coppers. He has spent the majority of his existence asleep in his mountain. V desperately tries to unlock his sword’s true power. Claire eases his restlessness, yet Vlad worries his nearness will endanger her life. Can V reconnect with his sword? What other surprises are in store for the Dragon Kings and their mates?

I have always been curious about V since his introduction in the series. I love how he unintentionally inspired the Dracula myth. I adore the effort V makes with Claire. He is a man used to keeping to himself, yet Vlad willingly initiates conversations to learn more about her. Also, he never once sugarcoats his opinions or thoughts. What I like most about V is how disconnected he is from the current time. He does not understand movie or music references, which often makes Vlad feel lost in the world.

It took me a while to warm up to Claire, especially since I did not read SMOLDERING HUNGER, book eight in the series. I like how trustworthy she is. Claire has kept the knowledge of the Dragon King’s existence secret since she learned about them. She even kept it from her best friend. I love how Claire refers to Vlad by his name rather than his lettered nickname. What I admire the most about Claire is how she never once gave up hope. No matter the duds she found while dating, she remained optimistic about finding Mr. Right.

IGNITE is book fifteen in Donna Grant’s paranormal series, DRAGON KING. It is necessary to read the prior books and novellas in the series to better understand the continuing plot happening in the background. I love how some of the couples from previous books show up throughout the story, especially Ulrik and Eilish.

IGNITE is an enthralling tale of two lonely, kindred souls finding each other. I wish the author dropped a little more information about the enigmatic Others. I cannot wait to see which Dragon King is next.