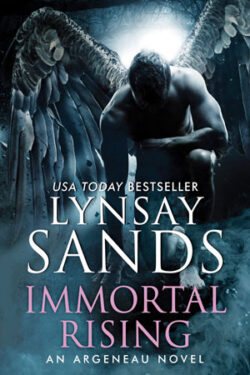 The 34th entry in author Lynsay Sands’ The Argeneau series, IMMORTAL RISING can stand on its own and is an exciting addition to the series as a whole. I read the first few books a long time ago but had no problem understanding this one, as it focuses on two separate characters in their own love story.

Stephanie McGill was turned into a vampire as a teenager, and her abilities make it vital she stay far from others, for her own sanity. When she meets her new neighbor, Thorne, she realizes something is very different about him. He’s not an immortal, like her, but he’s not human either. And he, like Stephanie, is looking for a place to hide out, away from others. But Thorne comes with baggage, and that baggage poses a danger to him and to Stephanie. They’ll have to work together–with some help from old friends–if they want to make it out alive.

The romance is sexy, the characters well-fleshed out, and the danger and pacing enough to keep the reader interested without being overwhelming. IMMORTAL RISING is a solid, entertaining paranormal romance featuring an intriguing vampire clan. My only complaint would be a little too much detail in the mundane activities of the characters (i.e. buying groceries and what they were eating for dinner, where they went to buy ice cream…) which seemed a little too drawn out. But all in all, an enjoyable read.