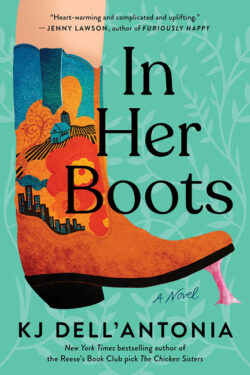 IN HER BOOTS by KJ Dell’Antonia starts off slowly and doesn’t pick up until Rhett is in New Hampshire on her family farm. With the loss of her beloved grandmother, the farm is no longer as she envisions it. She’s hoping to make it viable again since she’s to inherit it. Except that’s not what dear old Mom, whom Rhett hasn’t seen in twenty years, has in store for it.

The story jumps, making the plot a little jarring. There are a lot of characters to sort through, and Rhett doesn’t have a relationship with any of them. When she and her best friend reconnect in New York before Rhett heads to New Hampshire, she feels that her friend is settling and remains distant. All the angst between characters often gives the story a depressing feel. Rhett isn’t true to herself or others but keeps getting angry at her friend for not doing exactly what Rhett wants. She acts more like a teenager than a forty-year-old.

The animals bring some life and laughter to the story. The descriptions of the farm and lands are vivid and put the reader right in the middle of the story. There is some closure with the many relationships healing, and several of the characters reinvent themselves, which shows growth. I would have liked an epilogue to see how their lives played out since the book ends abruptly.

The titles given for each chapter and the discussion questions at the end are a nice touch and give pause to think about the book. The cover is cute with details placed on the enlarged boot—very fitting since boots play a big part in the story.

IN HER BOOTS is an emotionally filled, at times depressing, story that doesn’t always satisfy but does make you think about what you’ve read.