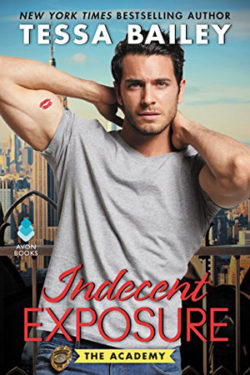 INDECENT EXPOSURE, the second book in THE ACADEMY SERIES, left me wanting more. There is such energy throughout the book, even with Jack’s problems that he’s always kept to himself. Enter a feisty, red-headed girl from Dublin in New York City for two weeks to be a firearms instructor for the NYPD and things get interesting fast. Especially when she and Jack first meet on the street. They have no idea there will be a connection between them in more ways than one. The chemistry between them was off the charts and just got better throughout the story.

It was nice to be back with Jack’s roommates, Charlie and Danika, who we met in book one, DISORDERLY CONDUCT, as well as Charlie’s girlfriend, Ever, and his brother, Greer. INDECENT EXPOSURE picked up where we left off, but the story kept getting better when Jack was front and center. The book is filled with family and friends, which adds to the sexy romance. The sights of New York and involvement of training and police work added to the rich detail.

The story flowed smoothly and was told from either Jack’s or Katie’s perspective. There were quite a few twists and turns but also many layers to the story, and the characters had a depth to them. There was nice closure with the epilogue and the hint of the happily-ever-after that played out differently than I expected. I can’t wait to return for more in the third book of the series, DISTURBING HIS PEACE.

Bailey is a new-to-me author, having only read the first two books in this series. I look forward to reading more of her books.