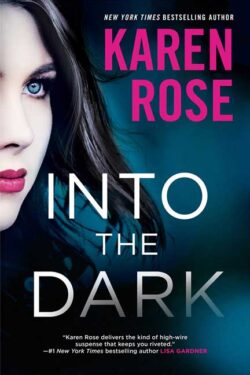 INTO THE DARK by Karen Rose is the second book in the Cincinnati Novels I’ve read. It is a page-turner, romantic suspense that opens with a teenage boy, Michael Rowland, witnessing the murder of his stepfather while rescuing his younger brother, Joshua. Michael has been abused by his stepfather and his mother, who is a heroin addict.

Diesel Kennedy is Joshua’s soccer coach and a reporter for the newspaper. He has spent a lot of time reporting on child abuse and was an abused child himself. He recognizes Michael is being abused and takes him to a doctor, Dani Novak, who is partially deaf and signs. She also happens to be a emergency foster care provider and takes the boys in.

Diesel, has been attracted Dani for more than a year, but she keeps him at arms length. She afraid to love again after her fiancé committed suicide and blamed her before he died. She has feelings for Diesel and has since the moment she met him, but she’s afraid of hurting him.

Michael’s stepfather’s body is found, and the killer learns that Michael gave the police his description. Now the killer is out to tie up loose ends, and he is hunting for Michael. But between Dani and Diesel, plus local police and FBI, no one is getting to him.

Diesel and Dani are thrown together and determined to keep the children safe, but spending so much time together, they can’t deny their feelings for each other any longer. They become involved.

INTO THE DARK is a fast-paced read. The whole story is told in three days, which keeps the story moving. I couldn’t put it down and love this author, but the story line is so dark I only read her occasionally. But she delivered a happily ever after that is satisfying and the perfect ending.