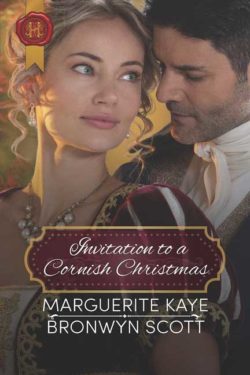 INVITATION TO A CORNISH CHRISTMAS is an anthology that has stories by both Marguerite Kaye and Bronwyn Scott. Both stories overlap and have the same characters and locale. While Cador is only mentioned in passing in THE CAPTAIN’S CHRISTMAS PROPOSAL, we get to meet him in UNWRAPPING HIS FESTIVE TEMPTATION. Both stories have characters returning home to Cornwall. Will they make it their home once again or leave once their obligations are fulfilled? Marguerite Kaye and Bronwyn Scott have collaborated before on SCANDAL AT THE CHRISTMAS BALL and SCANDAL AT THE MIDSUMMER BALL, and I enjoyed them both.

THE CAPTAIN’S CHRISTMAS PROPOSAL by Marguerite Kaye has Emily and Treeve front and center and begins in November 1822 in Porth Karrek, Cornwall. I love the scenic descriptions of the town, the beach, and the homes. Emily has run away to Cornwall from her native Leeds after a love gone wrong. Treeve is in the Navy and has only returned home so that he can settle his brother’s estate (since his brother drowned) as the new heir. The story flows nicely but ended a little abruptly for me. But the plot, involving secrets, rumors, and a lovely romance also included a bevy of details about Cornish Christmas celebrations. A nice holiday read.

UNWRAPPING HIS FESTIVE TEMPTATION by Bronwyn Scott has Cador and Rosenwyn as the hero and heroine. The story begins December 1, 1822, also in Porth Karreck, Cornwall, and references things that happened in THE CAPTAIN’S CHRISTMAS PROPOSAL. This helped tie the stories together and was a nice touch.

Cador left Cornwall with his parents’ blessing when he was only eight years old to pursue music. This is the first time in twenty years that he has returned. If it wasn’t that he’d been commissioned to write a Christmas cantata by Treeve, he would never have come back.  He has nothing but bad memories of growing up there and of his father. Cador has had a lot of losses in his life. Rose had done a season in London a few years ago but returned home single. She’d been burned by a lying fortune hunter, having naively fancied herself in love. Her interactions with her sisters add some fun, and her romance with Cador, in addition to the Cornish Christmas traditions, makes for a well-rounded holiday read. I do wish there would have been more before the story ended, though. I fell in love with the characters!