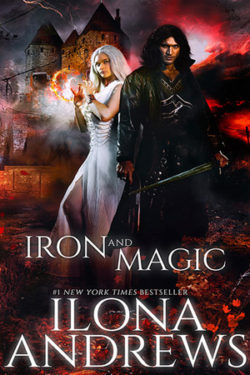 Ilona Andrews returns to the authors’ creative, enthralling world where magic and technology coexist, often with dangerous results. The husband and wife writing team of Andrews has done the impossible, taking a nasty villain from the KATE DANIELS series and making him not only likable, but a true hero! I swear, Ilona Andrews can do no wrong! This book was outstanding all on its own, but knowing the backstory of Hugh made his transition from villain to victim to hero a masterpiece of urban fantasy.

In the first of the new IRON COVENANT series, IRON AND MAGIC, Hugh d’Ambray, Preceptor of the Iron Dogs and Warlord of the Builder of Towers, has been cast aside. He was once immortal, a general who served a godlike master. Now he’s all too human, though still filled with magic. Upon learning his men (and women) are being hunted down by his old master, Hugh decides to be the leader his people need. To that end, he marries to gain them security, wedding the White Lady, a great sorceress—Elara Harper.

Elara is a fascinating creature, beautiful but deadly. She’s known by some as the Abomination, and she has power. So much power… So it galls her to have to rely on someone like Hugh d’Ambray, a warlord with a terrible reputation for killing everything in reach.

She and Hugh hate each other at first sight. She provides Hugh and his people with food, shelter, and money. Hugh and the Iron Dogs provide security, and none too soon as a mysterious entity is devouring the people surrounding Elara’s keep.

These two dark protagonists must learn to trust each other if they’re to survive what’s coming. But Hugh doesn’t know the nature of the woman he’s married. And after facing off against his old master, Hugh isn’t sure exactly who he is either.

Holy cow! This book blew me away. It had humor, heartache, passion, danger, and action. So much action! I flew through the pages, learning about Hugh and wanting more of his secrets. Elara was the perfect foil for someone of Hugh’s power. She’s a might all her own, regal, strong, yet a woman with vulnerability all the same. I loved the way the authors treated her and can’t wait to learn more.

Passion, action, humor, IRON AND MAGIC has it all! Another AMAZING story by the indomitable Andrews. I’m going back to read it again and again. This is my top read so far of 2018.