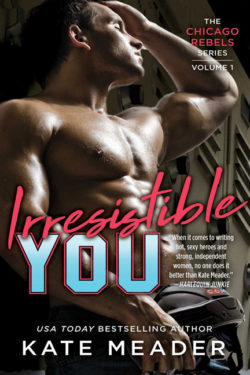 I’ve enjoyed Kate Meader’s books that have firefighters at their core, and now I’ve met the Chicago Rebels hockey team–wow are they hot! The book is steamier than I expected off the ice. Harper, the team’s part owner and General Manager, and one of her players, Remy DuPre, have chemistry that is too hot to handle…or is it?

IRRESISTIBLE YOU, the first book in the new CHICAGO REBELS SERIES, is combustible. There are so many stories intertwined and connected, and the plot is fast paced. There are estranged half sisters who must get along for the good of the team, and to fulfill their deceased dad’s wishes regarding his team and their ownership. The team has done poorly the last few years, and Remy is one of Harper’s hopes to get them back in the groove. But will her plans backfire due to a deal they made when he joined the team?

This is a sports romance about hockey players and the team plays a big role. There are steam-up-the-sheets moments along with a bevy of characters interacting, from family and friends, to the players and front office who deal with hardships, contracts, and trades. The characters have a depth to them and we get to know them little by little, and while some of the story line is predictable not all of it is. There’s a realism to the way some of the players interact with their families, especially Remy.

The happily ever after resolves the story nicely,  as well as the prologue and first chapter of the second book in the series, SO OVER YOU, in the back of the book–which just whetted my appetite for more. I can’t wait until it’s out in December!