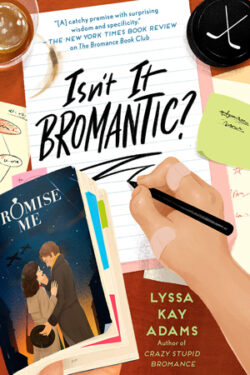 ISN’T IT BROMANTIC? is the fourth book in the BROMANCE BOOK CLUB series, and I certainly hope it’s not the last. The only one I haven’t read yet is the first book in the series, which I hope to rectify soon. This is Elena and Vlad’s story, and it is a quick read with so much packed into it.

Elena and Vlad have been best friends since growing up together in Russia. They’ve been married for six years but have lived apart for most of it since she goes to school in Chicago (to get her master’s degree in journalism) while he lives in Nashville. Vlad plays pro hockey and is part of the Bromance Book Club with a group of male friends.

The Bromance Book Club discusses romance novels so they can be better at romance and their relationships. When Vlad is hurt in a playoff game, his friends call Elena. She returns to Nashville to see if she can help him but always seems to have one foot out the door. Neither is good at communicating, and that gets them into trouble. Will they figure out what they want before it’s too late?

The rich friendships really make the story work. I loved how involved all his friends are, but ultimately it’s up to Elena and Vlad to figure out what they want—their marriage or to go their own ways. Elena had a troubled home life growing up in Russia, and a lot of that comes into play in the story. Her father was a journalist who ended up dead due to a story he was writing. She seems to want to pick up the thread investigating that same story, which could turn out badly for her as well. Meanwhile, Vlad is writing a romance novel that we’re given glimpses of with input from his friends. And it’s funny and heartwarming to see how his fictional story mirrors the one we’re reading!

ISN’T IT BROMANTIC? is a romance with strong relationships, whether it be friendships among the men or between Vlad and Elena. Sexy and fun, this is a story not to be missed. I hope that we meet up with the men of the Bromance Romance Club and their women again and again.