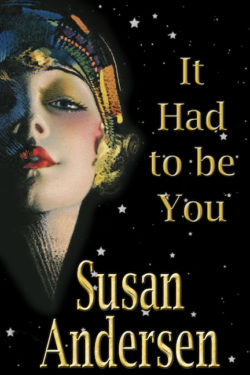 IT HAD TO BE YOU is a departure for Susan Andersen since it’s a historical romance set in the 1920’s in Washington state. Booker is the owner of a posh and profitable speakeasy where Lola becomes the star attraction. She and Booker have a past from their childhood when she was known as Lena, and it’s not all good. When they figure out neither one did the other wrong, where will they go from there?

Booker and Lena still have chemistry, but the years they’ve been apart prove a challenge. It’s interesting to see and feel Booker and Lena’s interactions since many emotions are involved. Their friend, Will, is also a part of the story, but whereas Lena has kept in touch with him and they’ve been best friends for all the intervening years, the same can’t be said for Booker. Booker seems to have lost touch with both of them when he joined the war, but is it really his fault? The interactions among Booker’s employees have a realness to them, and Lena seems to help ground Booker.

The story is filled with family disharmony, music and fashion, speakeasies and romance.There are also a lot of emotions brought out in the story.

The story flowed but not as smoothly as I’d like since each chapter was told by either Booker or Lena, and I had to remember who was telling the story in each chapter. I liked that there was a statement or title to each chapter. There was a happily-ever-after and nice closure, especially with the two epilogues–one told by Booker and the other Lena. The epilogues also gave us some closure to the other characters, namely Will, Dot, and Clara.

Andersen is an author who I have not read in a while. I will be adding some of her books to my always growing TBR pile.