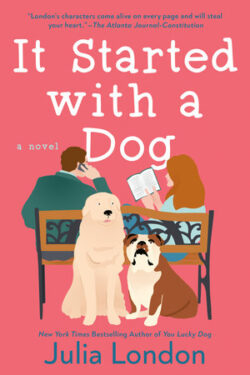 IT STARTED WITH A DOG is cuteness overload and simply irresistible! This is the second story in the Lucky Dog series starring adorable rescue dogs, a comical cell phone mix-up, a rivalry between coffee shops, a ravishing romance and more. This time Harper Thompson is shooting for a promotion with a trendy coffeehouse she’s worked her butt off on. However, it’s across the street from a family owned coffee shop.

Jonah Rogers is fighting a losing battle. His family business, Lucky Star, is steadily leaking funds. Now a brand new coffeehouse is opening up right across the road. How will he save his fledgling family coffee shop as competition brews?

Fate throws Jonah and Harper together when they mistakenly grab for each other’s phone during a ride home in a Lyft. Neither has time for romance but tingles of attraction sizzle between them. After finding out they have each other’s phone, a friendship grows as they discover they have common interests. Harper adores the hunkalicious guy and his big beautiful dog named Truck. He is perfect for her, but isn’t interested in dating, since work is horrendous.

Jonah is also smitten with the sizzling sexpot! Harper has it all, beautiful, successful and kind. Only, they work at opposing businesses. A contest involving rescue dogs will hopefully boost sales at their shops. So, Harper chooses a crotchety bulldog for her store, as Jonah selects a lovable three-legged dachshund for his shop. Businesses in town enter the contest but only one dog can be crowned King Mutt. Between all the fuss and rivalry, will Harper and Jonah discover their hotness quotient is best together?

IT STARTED WITH A DOG is a battle of coffee shops, pawsitively precious pups, and a darkly roasted romance as two independent business owners battle it out in Ms. London’s perfect novel. Romance spills over the pages in this delectable story. Can Harper and Jonah’s new relationship survive the strain of being rivals? IT STARTED WITH A DOG is emotional, powerful and playful!