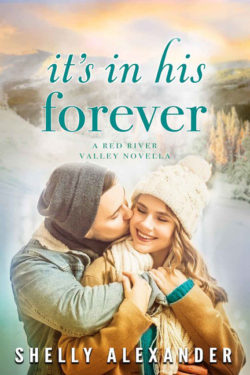 At one-hundred and four pages, IT’S IN HIS FOREVER, book 5 in the RED RIVER VALLEY series, was quick paced. It had many of the characters we’ve met before in the other books in the series, which only left me wanting more. Although I’ve only read two of the other books in the series, IT’S IN HIS HEART and IT’S IN HIS SMILE, I didn’t feel lost and got sucked right back into the drama of the small town in the mountains of New Mexico.

Sandra and Langston have a long history, but no one seems to know about it. Though they’ve dated secretly for over ten years, Sandra thinks it’s time for her to move away to get away from her past and bad girl image and so Langston won’t get tainted by association. She’s planning to shut her business down after the International Snowboarding Association event she brought to town ends, hopefully as a success.  Little does she know that her hard work has gotten noticed, and it might not be so easy to leave after all.

Sandra and Langston have chemistry, and she’s trying to put out the flames, but Langston has other plans and so do some of the townspeople. I loved their interactions and how just a look, a word, or a touch brought on the heat. There are a lot of innuendos and memories that Sandra doesn’t want to think about except to store them  for when she’s gone. The story takes place on the mountain with skiers, snowboarders, and a lot of safety patrols. The story is a little jumpy, but there’s nice closure and a happily ever after when Langston gets a little help in the love department from an unlikely source–the Chairperson of the council.

I’ve only read a few books that Ms. Alexander has written. I’ve enjoyed them and hope to read more.