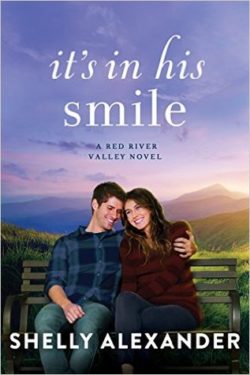 IT’S IN HIS SMILE (RED RIVER VALLEY #3) returns us to Red River Valley and the characters we’ve met before. It’s nice to catch up with them as well as meet new characters that add to the color and flavor of the town. Talmadge’s smile is killer, but so are other parts of him!

Alexander’s IT’S IN HIS SMILE has secrets that overshadow a lot of the story being told. Talmadge is having problems with his company and development that he left back in Seattle. He’s come home upon the death of his beloved grandmother, Bea. Miranda and Bea had a special bond, and she’s bereft now that Bea’s gone. Miranda and Talmadge haven’t seen each other in seven years plus months and days–that Miranda keeps track of–but their chemistry is still there.

Watching them struggle in their friendship and fight their attraction was often hearbreaking since Talmadge has a lot on his plate and a lot of people depending on him. His life is in Seattle. Miranda’s is in New Mexico since she’s planning to reopen his grandmother’s inn, which she’d purchased before his grandmother’s death with plans to renovate it together. Her crooked contractor has fled, her money is dwindling, and she doesn’t want to accept help from Talmadge or anyone else. But that’s too bad since Talmadge’s inheritance is dependent on the inn. He’s going to help and recruits others to do so as well.

When they are not fighting each other, Miranda and Talmadge have a lot going for them. They can make each other’s lives easier if the other will let them. Will love win out in the end?

Amidst an inn to renovate and a gazebo and rec center to build, Alexander throws antagonism and hurt, laughter and romance our way. The descriptions of the mountains, the town, the businesses and friendships made me feel like I was there. The story wrapped up nicely. I hope we get to return to Red River Valley at least twice more since there are more stories to tell. Langston, Talmadge’s best friend, and Jamie, Miranda’s brother, each need their own happily ever afters!

Alexander is a fairly new-to-me author and I look forward to reading more books in her RED RIVER VALLEY SERIES. I missed IT’S IN HIS TOUCH, book two in the series, but did read the first book, IT’S IN HIS HEART. I have some catching up to do! Red River Valley is reminiscent of Susan Mallery’s Fool’s Gold Series and Jill Shalvis’s Lucky Harbor.