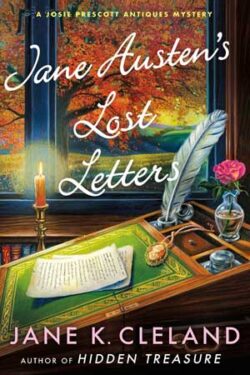 JANE AUSTEN’S LOST LETTERS by Jane K. Cleland is the 14th book in Jane K. Cleland’s Josie Prescott Antiques Mysteries series. While this book has some of the same characters as her other books, it is a stand-alone book.

Josie runs an auction house, does appraisals, and has a television studio as part of the complex where her television program is filmed. On the TV show, Josie has two experts, Oliver Crenshaw and Dr. Gloria Moreau. On the final morning of filming, Dr. Moreau fails to appear. Later, her body is found near the edge of the woods bordering Josie’s property.

A lady shows up saying she is an old friend of Josie’s father, who passed away. She gives Josie a box that contains two letters that seemingly are written by Jane Austen and a letter from her father.

There are sightings of a strange man who appears to be stalking the TV studio. After a second death and someone shooting at Josie through her window, her husband and the police feel the safest place for her is inside her house. Things go downhill from there.

Josie and Ty are a good couple. He gives her full rein over her safety until it becomes too much for her and then he steps in. And Ty being an ex-police officer and Josie an amateur sleuth, between the two of them, they are able to discover the murderer.

The story is full of surprises and twists and turns. If you enjoy contemporary cozy mysteries and learning about antiques, you will love this book!