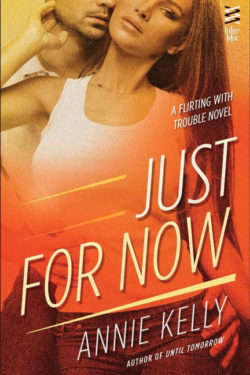 JUST FOR NOW is the third book in the FLIRTING WITH TROUBLE SERIES, but I haven’t yet read the first two books, AFTER TONIGHT and UNTIL TOMORROW.  I was able to quickly sort through the characters and some of what might have previously occurred, but I didn’t feel either Rainey or Owen had any depth to them. They each had secrets or thoughts they were holding back, especially Owen. Their chemistry was hot and sizzled, but their relationship was so inappropriate. Not only was he her new boss, but when their lust overtook them, they didn’t care where they were.

The story’s pacing ebbed and flowed. There wasn’t a lot of plot because there were so many steamy moments, but what there was was heartwarming, especially when Rainey gave her all to the After School program where she was the assistant director. (Having her degree in social work doesn’t hurt in the field she’s in either.)

Relationships between Rainey and her family were definitely strained, especially since her parents wanted her to be more like her sisters, which she told them would never happen and they seemed all for show. The sisters didn’t care about anyone but themselves.

A family and friends romance with some intriguing conflict–misappropriation of funds, a police investigation, needy teens–JUST FOR NOW also had plenty of spicy moments with the potential for a happily ever after in the future for Rainey and Owen. Her friends were already getting their HEA’s, which didn’t phase Rainey at all. There is some closure but I had no idea I was at the end of the story until I came to the acknowledgments page on my Nook.  I actually turned back to make sure I hadn’t skipped a page.

Kelly is a new to me author and I’d give her other books in this series a try to see if there was better closure.