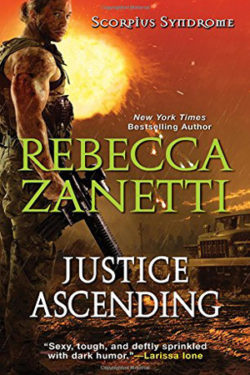 In Rebecca Zanetti’s JUSTICE ASCENDING, the world has become a dangerous place.  After the Scorpius bacterium spread throughout the world, most of the population died. Some who were infected recovered but were not the same as they were before. The bacteria changed their brain chemistry, altering how their bodies function. Those who are left are struggling to survive. Finding food, medicine, and shelter is paramount. However, rebuilding the world also means fighting against those who want to control what resources are left and do not care who they have to kill to get them.

Tace Justice was a soldier overseas when the bacteria hit. His family died before he could get back home to Texas. He is a member of Vanguard, a group of survivors who are working together to rebuild society. His military training has made him an expert in protecting the civilians housed within Vanguard, and he puts his life on the line each time he goes out on patrol to ensure other harmful factions cannot enter their territory. Tace contracted the bacteria and survived, but something is not right. He has begun to experience strange symptoms others have not experienced, which makes him fear his sanity. He is afraid he is headed toward a dark place.

Sami Steel is a member of Vanguard. She is an awesome fighter and does not hesitate to take whatever action needed to protect her partner when on patrol. However, Sami is not what she pretends to be. She is harboring a secret that could result in her being expelled from Vanguard, the place filled with those she now considers her family. On top of that, she and Tace are developing feelings for each other, which neither wants. When Sami realizes something is off with Tace, she knows she needs to expose her secrets in order to try and save him, even if it means losing everything.

JUSTICE ASCENDING (THE SCORPIUS SYNDROME) is filled with action, adventure, love and hope. I thoroughly enjoyed reading this book, and you can’t help but ponder what you would do if put in the same situation. Rebecca Zanetti has created a world that is not only scary, but also not beyond the realm of possibility.