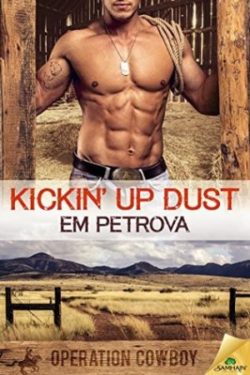 For Marines Brodie Bell, Garrett, and Wydell, returning home to Los Vista, Texas after their latest tour in Afghanistan is a bittersweet affair. They’re returning minus one, their childhood friend and platoon leader, Matt Pope. Brodie’s hand-delivering Matt’s belongings to his family and already dreading the task before they ever enter town, but throw in the devastation left by a tornado and the entire situation is simply overwhelming.

The whole town has basically been leveled, with the exception of the Bell and Pope ranches, but they’re both in dire straits as well. It’s not until Brodie pays a visit to the Popes and he gets reacquainted with Matt’s little sister, Danica, that a plan forms in his head – merge the ranches and rebuild the town. The biggest problem with that whole idea is Danica herself. She’s Matt’s little sister, and that puts her firmly in the category “off limits,” but there’s no denying there’s a sexual chemistry between them. There are going to be lots of long, wet, sweaty hours they’ll be spending together – and there are things he’d love to be doing with her that don’t involve hard work.

KICKIN’ UP DUST is the first story in Em Petrova’s new OPERATION COWBOY series. As a reader, I quickly became immersed in the camaraderie between the Marines returning home from the war to a desolated town, and at the same time cheered their resolve to help fix things. My heart broke for Danica and her parents, who suffered two tragedies in such a short period of time, but rejoiced at Danica’s determination to continue living despite everything. I do have to confess her parents’ depression (while understandable) pissed me off because they just gave up on life and left Danica to deal with everything on her own. She had just as much reason to be grieving as they did.

Ms. Petrova did a wonderful job telling Brodie and Danica’s story. It’s passionate, heartwarming, and at times bittersweet. There’s no doubt Matt’s memory is always there, and sometimes it’s an issue for them – mainly because Brodie doesn’t believe Matt would approve of them being sexually involved. Danica is simply a study in frustration because everything Brodie does is either to push her away or pull her back to him, but I have to admit, she handles him beautifully.

I’m now eagerly looking forward to Garrett’s and Wydell’s stories. Those are some hardworking men who can use some lovin’.