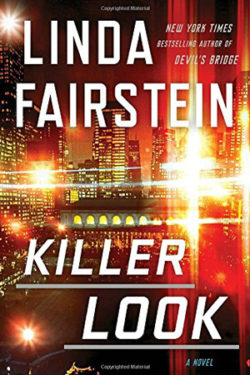 KILLER LOOK is the first book I have read by Linda Fairstein. Although this is a stand alone story, it only took me a couple of chapters to realize there is a significant back story between Alex Cooper and Mike Chapman that I would have liked to have known more about. That being said, I enjoyed the banter between the two characters but thought at times, his attitude toward her PTSD was not as understanding as it could have been. I would have smacked him upside the head if he made some of those comments to me.

The story takes place in New York City’s Garment District. Ms. Fairstein’s description of various areas within New York City and the history of the garment district were amazing. I never truly appreciated how the industrial revolution impacted designers and had no understanding of how cutthroat the various fashion companies are.

The murder of a prominent designer was complicated and bizarre. The list of suspects long and intriguing. There are so many twists and turns that I found myself going back and forth trying to figure out who was responsible. The end was not disappointing, but it does leave you with another mystery.

Now that I have been introduced to Alex Cooper and Mike Chapman, I want to read the earlier books these two characters star in and learn more about their history.  An enjoyable read.