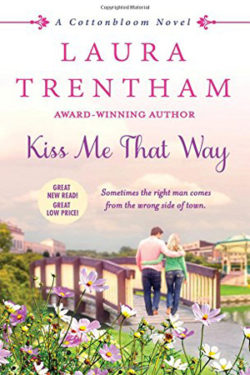 Monroe Kirby has never forgotten the boy who saved her one fateful night when one of her mother’s suitors made an inappropriate advance. While she comes from a life of privilege, Cade Forunette’s life had been a struggle to keep his siblings together and keep them fed since his parents’ untimely deaths and up until the point he left Cottonbloom with no explanation and no goodbye.

Years later he’s returned and reconnects with Monroe. She’s a physical therapist and teaching girls self-defense on the side – and while Cade knows he’s no longer the river rat he was long ago he still feels like he’s not good enough for her. Monroe understands Cade doesn’t have the best background. She’s got issues of her own – living on opposite sides of the river that separates Cottonbloom didn’t protect her from some of the harsh realities of life and it certainly didn’t prevent her from falling in love with the boy who once protected her.

Now with the community of Cottonbloom and their friends at odds over dueling festivals, bickering friends and siblings, sabotage, teenage angst, and plenty of laughter and tears, Monroe and Cade will have to decide if they can achieve a happily ever after or lose everything when he returns to the life he’s built in Seattle.

I admit it, I typically avoid the sweet covers in favor or racy ones, but I’m so glad I didn’t do that with Laura Trentham’s KISS ME THAT WAY. The storyline captured my interest right from the beginning with Cade and Madison’s backstory and took me on quite an emotional journey as they dealt with their insecurities, raw feelings for each other and the uncertainty of a future together.  I was highly entertained with all the battles between Cade’s brother, Sawyer, and Madison’s best friend, Regan (their story is in TILL I KISSED YOU – I’m going to have to force myself to read THEN HE KISSED ME first because I’m really dying to delve right into their story). However, THEN HE KISSED ME won’t be a painful read since Tally, Cade’s sister, is a great character as well and I do want her to get a happily-ever-after too.

This is my first read by Laura Trentham but it definitely won’t be my last since I now officially have the next two of the COTTONBLOOM series sitting on my nightstand and the last one on my iPad.

KISS ME THAT WAY

THEN HE KISSED ME

TILL I KISSED YOU