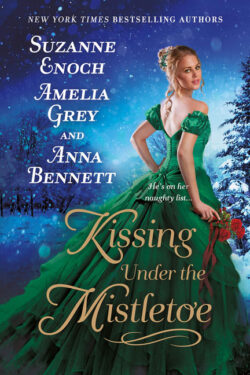 Each story in this anthology takes place around Christmas. I found it interesting to read how differently the regency era, and the Highlands, celebrated the holiday. I generally do not read holiday-themed stories or anthologies. However, I made an exception because of Suzanne Enoch. She is a favorite author of mine, and I adore the series her novella belongs to.

Jane Bansil is the impoverished, spinster niece of a blue-blooded family. She is also Lady Aldriss’ paid companion. Jane accompanies her employer to the Highlands for Christmas. She meets the MacTaggert’s older cousin. The man not only notices her, but Brennan opens her eyes to new possibilities. Can Jane muster the bravado to be with Brennan? Or will she chicken out?

Brennan Andrews is the older cousin to the MacTaggert brothers. He is also a widower and an architect. Brennan agrees to design Lord Glendarril’s dream house. He encounters an intriguing Sassenach female in his cousin’s library. Jane is the first woman to stir Brennan’s interest since his wife died. Can Brennan convince Jane to remain in Scotland? Or will he lose her too?

I am so happy that Jane received her happily-ever-after. She is one woman who deserves it. At one time, I wanted Jane to end up with Gavin, the MacTaggert’s groom. However, I will admit that Brennan is the better man for her. What I adore the most about Jane is the sacrifice she willingly made for her younger cousin. She would rather have Amy happy than stuck in a loveless marriage, even at the price of her job.

Brennan is an absolute love. Honestly, he is every bookworm’s dream man. Who in their right mind would not fall for a man with the capability of designing their dream library? What I adore the most about Brennan is his patience with Jane. He found a kindred spirit in her, especially one who shared his scholarly interests. So, Brennan took the time to coax the true Jane from her shy shell.

GREAT SCOT is book 3.5 in Suzanne Enoch’s historical romance series, WILD WICKED HIGHLANDERS. I recommend reading the prior three books before starting this one, especially book one, since that is where Jane is first introduced.

I still hope Gavin gets a story, even if it is another novella. I just think he needs a lass to tame him.

John “Gate” Gatestone is the grandson of a quarrelsome duke. He offers to help his ailing grandfather find a particular tree that bears his and his late wife’s initials. Gate crosses paths with a saucy female in the forest. Isabelle makes him want to abandon his family’s code of conduct. He asks for her assistance in finding his grandfather’s special tree. Will Gate find the tree before Christmas? And will he be able to leave Isabelle behind after?

Isabelle Reed is the great-granddaughter of a viscount. She helps her mother run their family inn. On the side, Isabelle teaches the local village girls how to read and write. She has one rule: never to fall for any of the men who stay at her inn. However, Gate tempts Isabelle to break that rule. She agrees to help him in his search for a certain tree. Can Isabelle give Gate up once he accomplishes his mission? Or will she risk heartbreak?

Gate charmed me from the start of the story. He had this mischievous air about him that made him fun. I love how Gate wanted to have the kind of love that his grandparents shared. He refused to marry out of duty, instead he waited until he found the right woman who stirred his heart. What I adore the most about Gate is his willingness to help his grandfather achieve his last wish. He understood how important this was to his grandfather, so he defied their family to give the old Duke peace.

Isabelle steadily grew on me. She may be related to nobility, but she never put on airs. Isabelle prefers her provincial lifestyle than the active social life of the ton. I love how Isabelle is no stranger to menial labor. She does not make the inn’s staff do all the work. Instead, Isabelle can be found doing some of the chores to help the inn run smoothly. What I like the most about Isabelle is the care she gives to their permanent borders. She treats them as family.

This is my first foray with Amelia Grey’s works. CHRISTMAS AT DEWBERRY HOLLOW is a standalone novella. While reading, I never got the sense it belonged to a series. I am tempted to explore the author’s other stories.

MY MISTLETOE BEAU by Anna Bennett

Jack Hardwick, Earl of Frostbough, is the heir to a dukedom. He has a reputation of being cynical and cold-hearted amongst his peers. Jack happens upon a mysterious lady pawing through his underwear drawer. Eva proves to be the answer to his vexing problem. Jack promises to return her father’s watch if she agrees to a fake courtship.  Will Jack and Eva’s fake courtship turn into the real deal?

Miss Eva Tiding is the only child of a widowed viscount. She plans to get back her father’s pocket watch from the earl who swindled him. Eva reluctantly agrees to pretend to a fake engagement to the Earl of Frostbough, a man she detests. Or does she really? The infuriating man brings out the worst, and the best, out of Eva. Can Eva resist Jack’s temptation? Or will she fall madly in love with the jaded earl?

Jack is simply swoon worthy! I never could resist a broody, sardonic man. Jack is a man who let a childhood disappointment twist his outlook on life. He starts off indifferent and aloof. However, Jack begins to soften around the edges the more he interacts with Eva. What I love the most about Jack is his verbal spars with Eva. He never says anything outright cruel; he just knows the right things to get a rise out of her.

I liked Eva from the start. She is not a simpering, timid miss. Eva toes the line of the limitations set to her sex and station. What I love the most about Eva is her ability to stand up to Jack. She refuses to allow the man to intimidate her. Eva continues to prove that she is an even match for the detached gentleman.

Anna Bennett is a new-to-me author. MY MISTLETOE BEAU is a standalone novella. This story made me smile (hugely) at the end. I could not help but be swept up in the wonderful storytelling.

KISSING UNDER THE MISTLETOE is a series of delightful and warm-hearted stories. I like how each author focuses on the characters and the storyline over the festive season. The holiday is more of a backdrop, like a setting.