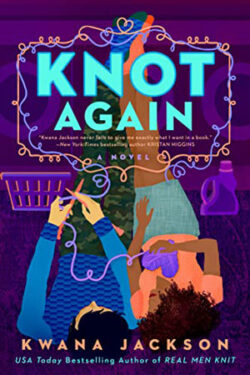 KNOT AGAIN is the second book in the Real Men Knit series and the first one I’ve read by this author. I plan to read the others in the series to reunite with the Strong brothers and see where their lives are.

The story is set in Harlem, primarily at a knitting shop and a laundromat with quite the cast of characters. Family and friends abound, but many suffer loss. So many characters are trying to stay strong—no pun intended—when there are others around to help them, if they would just let them. Lucas and his brother, who call the knitting shop home, have suffered from rough childhoods.

This is Lucas and Sydney’s story, but Lucas’s brothers and her family have supporting roles. Sydney’s ex-husband thinks she owes him something, and he can’t be more wrong.  She’s back helping her grandfather at his laundromat due to a health scare and has her daughter in tow. Her mother and her ex don’t feel it’s the right place for them.

Lucas is a firefighter fighting many demons and doesn’t like letting anyone in. Will his crush on Sydney from fifteen years ago crush him now? Or is Sydney finally feeling the same things he is?  Her daughter grounds her, although too many times Sydney thinks she’s too much like her mother while making decisions regarding the raising of her child.

Lucas and Sydney take one step forward and two or three back each time one of them speaks. They have a problem communicating, just like they did when they were younger.  When they touch or kiss, however, they have no trouble understanding each other. Lucas definitely appreciates Sydney and her talents, but his self-esteem is so low he’s always apologizing until Sydney gets him to see what she sees.

The interactions with the neighbors and Lucas’s coworkers at the firehouse make the story shine. There are some sweet moments in between some of the dark memories.  The story has a good flow and a happily ever after thanks to the epilogue that went above and beyond. I can’t wait to see what happens next to this family. I can’t knit, but this book almost had me trying to once again!