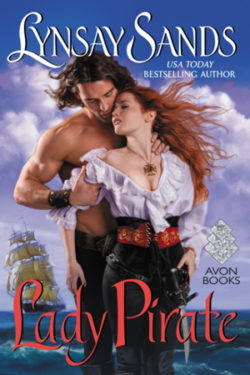 Sailing the high seas, then trying to find a husband in Merry Old England with rapscallion pirates, has never been so much fun.

Lynsay Sands has done it again with a wonderfully fun, exciting, and sensual tale in LADY PIRATE. Having assumed control of her murdered brother’s captaincy as the dread Captain Red, Valoree has done her best to accumulate the wealth that would finance the birthright she’s inherited. She’s the heir to Ainsley Castle, after all, with her brother now gone, and the only hope her crew has for a peaceful future.

But in order to inherit, she must marry a nobleman and produce an heir. Valoree is no lady, and her crew knows it. But with the help of a “prostitute” taken off the street, and the crew’s efforts to get their captain married and settled, the entertaining hunt is on to find Valoree a husband.

Valoree would rather walk the plank than marry, but she’ll do anything for her crew. So she methodically goes about finding herself a husband. It’s a painstaking process filled with trademark Sands humor. When the crew votes to marry her off to a man who fascinates her like no other, despite her reservations, she does. And then she doesn’t. It takes a kidnapping and a bit of drugging to get everyone in agreement. And the adventure only gets better from there.

Sands pens a story full of three dimensional characters, from No-Nose to One-Eye to the dashingly handsome Daniel, Lord Thurborne. Valoree is a heroine to root for, raised by pirates, unused to societal constrictions, and a woman who speaks her mind and curses like a sailor.

Everyone has something at stake. Who is Meg, really? A prostitute, or someone else? What does Daniel have to hide? And who keeps trying to hurt Valoree, because the accidents that keep happening around her are a bit too much to be coincidental?

There’s plenty of humor, sexual tension, and rollicking good fun watching the pirates, and Valoree, adapt to high society. For a sexy read that will keep you laughing, one that reaches out and grabs you by the heart and funny bone, check out Lynsay Sands’s LADY PIRATE.