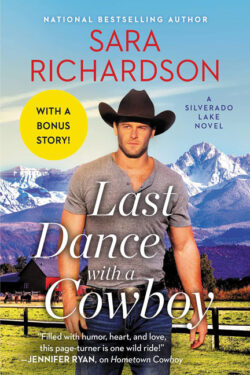 LAST DANCE WITH A COWBOY is the third book in the SILVERADO LAKE series set in Colorado with breathtaking mountain views, a small town with a tight knit community, and a struggling family winery. This is Leila’s and August’s story.

Theirs is a second-chance romance. They dated in their teens and planned to marry after he returned from college, but August never came back. Not only that, he never called or told her why. Even his family that lives on the ranch next door to the vineyard don’t see much of him. When he returns to help the floundering vineyard, the idea of a fake engagement is born to keep Leila’s grandparents from finding out what’s really going on at their struggling vineyard.

The story started off slowly for me but picked up steam once Leila and August started communicating. There is a depth to the story and the characters, and it’s an emotional story with a lovely setting and passionate romance.

The bonus novella of SUNRISE RANCH (THE CANYON #2.75) by Carolyn Brown is included and is a totally enjoyable story. I now have to read the other books in the series! This is a quick-paced read at only eighty-seven pages, but a lot was packed into it. Bonnie is set to inherit her late father’s ranch, never having known him. She should have split it with her two half-sisters that meet at the funeral, but they didn’t fulfill the terms set forth in the will and gave up their shares, though they both still live in the area. I loved watching their relationship grow as sisters, and also how Bonnie and Rusty have to get around their constant bickering to realize they have feelings for each other. The story plays out nicely with a lovingly portrayed happily ever after.