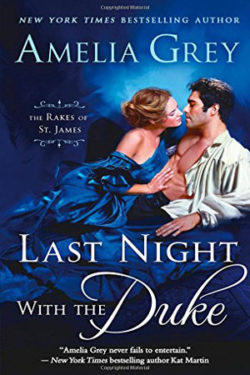 LAST NIGHT WITH THE DUKE by Amelia Grey kicks off THE RAKES OF ST. JAMES regency historical series with an intriguing look at how misdeeds can affect more than yourself. Three friends believe their prank was harmless, but they’ll soon find out how hard it is to overcome seeds sown. It will be entertaining to discover who pulls each rake from their beloved bachelorhood.

The Duke of Griffin must oversee his two sisters’ coming out for the Season. His own reputation has set the stage for trouble, so he seeks a well-bred woman from an employment agency to chaperone the girls. Can they avoid adding more fuel to the fire of the anonymous scandal sheet that broadcasts their secrets?

This novel has some fun attributes that add to each chapter. There are snippets from the scandal sheet, as well as tidbits from “Miss Mamie Fortescue’s Do’s and Don’ts for Chaperones, Governesses, Tutors, and Nurses.” The characters try to do what is proper, but there is always some underlying mischief to tempt them or appall them.

This is a very sweet story. Everything isn’t behind the bedroom door or after the wedding day, but the details are brief, so I think it will appeal to those who prefer sweet romance. It has that kind of vibe – slow and building to a forever love. The plot isn’t overly complicated, they’re just getting ready for the duke’s sisters’ first season of balls and parties. It’s such an enjoyable, easy read that I zipped right through the first half before I realized it.

Overall, I really enjoyed this book. I did become irritated with what seemed like selfish, self-serving actions by the duke, but he won my heart by the end. He’s characteristically accurate of the well-to-do in being accustomed to getting his own way, but the duke proves that he makes exceptions for those he loves. He is a typical man of his era and wants what he wants, so I was disappointed he wasn’t more thoughtful of Esmeralda’s future. But he made up for that, so it I was only miffed with him temporarily.

Esmeralda is strong but often a very sad character, because she has suffered much at the hands of others. She expects the worst without hope, so her happy-ever-after is the most poignant. I couldn’t help but respect her ingenuity and wherewithal to overcome the odds pitted against her. The duke’s sisters are entertaining, but I was especially smitten with Esmeralda’s younger sister. She was so cute with the duke and showed his softer side.

This is the kind of historical regency I love. There are balls and parties, gossip and mischief. And let’s not forget the sweet animals who add to the chaos and emotion, as well as move along the characterizations. I laughed out loud several times and then teared up. The lead couple are sassy and amusing together. Their sisters and friends add to the mix without being overwhelming. LAST NIGHT WITH THE DUKE is lovely entertainment that heightens anticipation for the next rake’s story in December 2017.