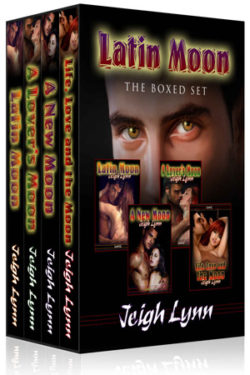 The boxed set of the LATIN MOON series is a scorching collection of 4 stories that are hot enough to melt metal and filled with love, danger, sadness, and hope. These are previously released books in which author Jeigh Lynn created a world where the werewolves are luscious and dominant and the women are hellraisers who can keep up with their men. Each couple brings something unique to the stories, and each are based on family, love, and vengeance for those who come after their loved ones.

What is an Alpha werewolf suppose to do when his mate is human and has no knowledge of werewolves? Alex Hernandez is trying his hardest to keep his fiancee Jessica from finding out before it’s time to tell her, but she’s making it very hard when the passion between them continues to burn hotter with each passing day. Now the danger is not just her finding out, but she has been hurt and someone is trying to kidnap her. Alex will stop at nothing to keep her safe, but with a missing packmate and danger still after her, will he be able to?

One night of passion leads to a surprise that Katherine Andrews was not expecting. And she sure wasn’t expecting to hear her doctor talk about aborting her child because it’s a werewolf. Knowing she can’t go to her best friend, Kat decides to run to the only cop she knows, but instead ends up with Adrian Garrett–her babie’s father. Kat decides to keep the baby a secret as long as she can, while allowing Adrian to protect her. But her ability to keep a secret doesn’t last long, and neither does Adrian’s ability to hide his wolf. So now she must protect her unborn child, deal with her baby-daddy being a werewolf, and try to keep away from the people chasing her. Easier said than done.

Brent Hernandez knows he will never have another mate, and that feeling of lonesomeness is becoming more than he can bear. Losing Rhett is a wound that will never go away, especially since he doesn’t know if she’s alive or dead. When she appears in his bushes with a gunshot wound and his twin sons, he knows he has his second chance. Finding out that Rhett was kidnapped by the same group that wants to eradicate werewolves sends the pack into a frenzy. Will the pack be able to destroy the organization that has set a bounty on their heads, or will that enemy group finally destroy the wolves?

LIFE, LOVE, AND THE MOON

Emilio, Sarah, and Michael have been together for 30 years. In all that time, their love has not faltered, even with ups and downs. Sarah is very glad that she attended the Day of the Dead celebration with her cousin all those years ago so that she could meet the two men who are the loves of her life. Being the bridge between these two strong mates and allowing them to follow their hearts has made her stronger. Emilio and Michael had always been told that their feelings for each other were wrong, so they decided to be friends instead. Sarah was able to bring them out to the light with her love and acceptance. They have a love to last a lifetime, and this is their story.

The LATIN MOON series is erotica at its best with the dash of paranormal to spice up the flavor. I remember reading this series when it first came out and have been not-so-patiently waiting for more from this author. What drew me to the books was the writing and the storyline. These stories are not strictly erotica. There is romance prevalent throughout the plots, with danger, intrigue, and twists and turns thrown in.