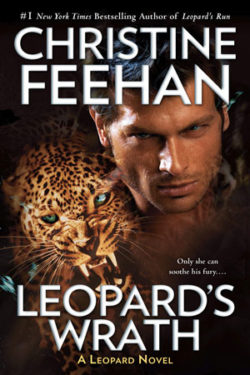 Mitya Amurov is a leopard shifter who lives in a dangerous world. He is in a constant fight with his leopard, who wants to be free. But the leopard is such an uncontrollable force when free that Mitya knows that if he lets loose, there will be bloodshed. While driving home one evening, he encounters a young woman with car trouble. When stopping to help, his leopard immediately lets him know he wants this woman. She soothes him. She makes him want things he believed he could never have.

Ania Dover doesn’t like criminals. She once lived her life surrounded by dangerous people and wants nothing to do with them. But for whatever reason, she just can’t seem to get away from those who threaten her entire way of life. She meets Mitya and is attracted to him yet put off by his controlling nature. And she’s not a woman who will obey a man blindly.

LEOPARD’S WRATH is the love story of Mitya and Ania. Mitya will do anything to protect what is his, while Ania is out for revenge against those who have destroyed her family. With everything they have to work through, can they overcome their differences to become mates? If you love stories about leopard shifters, this is the book for you.