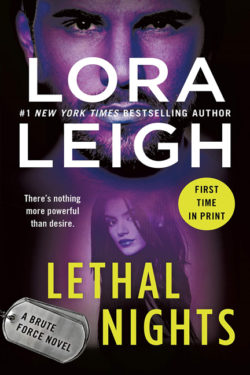 LETHAL NIGHTS by Lora Leigh is a very sexy, dark romantic suspense about Emma Jane Preston and Ilya Dragonovich. Ilya comes to Emma Jane’s rescue when she is about to lose her home and sets it up as a safe house. A year later, someone breaks into Emma Jane’s home and tries to kill her, even with state-of-the-art security.

Ilya walked away from Emma Jane the year before (even though he’d fallen for her) in order to protect her from people who would harm her to get to him. He returns to protect Emma Jane but can’t keep from making love to her and falling in love with her.

Emma Jane wants Ilya even though she knows once the danger is past he will leave and break her heart. Even so, she falls head-over-heels in love with him. And she knows the longer they are together, the harder it will be for her to say goodbye.

There are several attempts made on Emma Jane’s life, but Ilya and his team are there to protect her.

I was annoyed a couple of times.near the end. First, Ilya gives away what is going to happen when he is concerned about a character no one would suspect, and second, when Emma Jane makes a foolish choice that puts her life and those protecting her at risk.

Overall though, LETHAL NIGHTS was a fast-paced story that I really enjoyed.