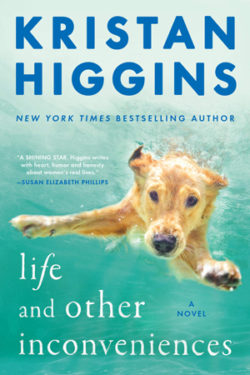 LIFE AND OTHER INCONVENIENCES was an emotional read with lots of secrets, twisted truth, dysfunctional families, and ultimately love. The story was told by a different character each chapter, and I had to sometimes look back to see which character was speaking. The story took place outside of Chicago and in Connecticut.

Genevieve had money and definitely used it to have others do her bidding. She was cold and aloof. Her great-granddaughter, Riley, whom she finally met as a teen, seemed to be able to break down some of her barriers. Riley was a typical teenager but really grounded, thanks to her single-mom, Emma and Emma’s grandfather, both of whom she lived with outside of Chicago. When things go astray on the friends front for the teenager, Riley jumps at the chance for her and her mom to summer in Connecticut at Genevieve’s when she finds out they were issued an invitation to do so since her great-grandmother is dying.

Emma has had a tough life. Her mother committed suicide, and her dad, Genevieve’s son, dropped her off to live with Genevieve, which she did for ten years. When Emma turned up pregnant and couldn’t attend college as planned, Genevieve kicked her out. Emma then went to live with her maternal grandparents. Emma’s life took a long time to get back on track, but she’s always there for Riley.

When they go to Connecticut, Emma’s grandfather rents an apartment to be there for “his girls” in case they need anything. We meet lots of characters—many whom Emma knows from when she lived there but others are new to her. All have trials and tribulations but it was nice to see barriers being broken down on many fronts. The characters were at times likable and other times not so much, due to often withholding the truth or their love. Though many p[ots seemed to be going on simultaneously, they were cohesive in the end. This was a nice story with family dynamics that were front and center throughout. It was definitely an enjoyable and quick paced read.

I’ve only read one other book by Ms. Higgins but have many of hers on my always growing TBR pile, and I hope to get to some of them soon. I was lucky enough to see her at an author visit at a local bookstore a few years ago.