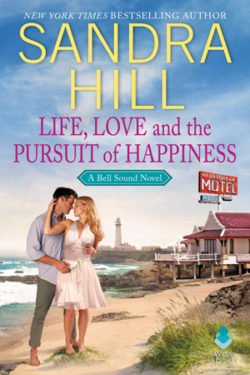 Bell Cove, North Carolina sounds like a wonderful, quirky place to live. Delilah inherited her great-uncle’s Elvis-themed diner and motel and is determined to reopen it to make a life for her and her daughter. Both businesses are pretty rundown, but she knows that with a lot of hard work, she can bring them back to live. She does have one fear though. Delilah is an ex-con and is fearful of being found out. She paid her dues and is starting life over and just wants the chance to build a future and raise her daughter.

Merrill is an adrenaline junkie and treasure hunter. His research brings him to Bell Cove, where he hopes to salvage a sunken ship he believes carried all kind of precious cargo. He spies Delilah and is blown away by her looks and attitude. He wants to get to know her better, but she wants nothing to do with him.  Merrill believes he’s a nice guy and can’t figure out why she keeps him at arms length when he knows they share an attraction.

Delilah ends up working for Merrill on his salvage job, and the close quarters definitely have then tap dancing around each other. Can she maintain her distance, or will they end up in a very compromising situation?  When Delilah’s grandmother, a former show girl who loves to gamble, brings her daughter home to live with her, the fun really begins.

The characters are funny and quirky. The town is delightful. This was such a fun book and a great summer read! I thoroughly enjoyed it.