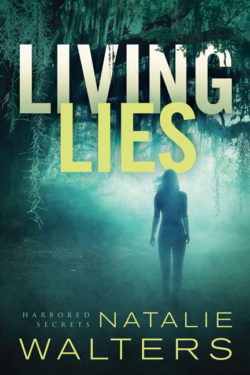 Debut novel LIVING LIES by Natalie Walters excels in portraying realistic characters during some of their worst moments with hope and love, within the center of a really good suspense. The murder of a young artist in a small town puts the neighbors on edge. Can widow Lane Kent and newcomer Deputy Charlie Lynch solve the crime without becoming victims themselves?

I was immediately drawn in by the suspense featuring a favorite artistic theme. There is so much to like about this novel. I connected with the characters immediately because they were relatable. Former Marine turned deputy, Charlie is a likable guy with a good sense of humor. Lane is somber with a mysterious past, which makes her leery of Charlie. He just wants to make her smile, something she hasn’t done much of since the death of her husband two years ago.

Lane’s son, Noah, is very cute, and most of the time he talks like a four-year-old. A few moments of dialogue seemed a bit too formal for four, but for the most part, he added a good human element to the story. Charlie’s dog adds in some humor.

There are many other secondary characters who have starring roles in this suspense. I enjoyed the sheriff and his wife, as well as the many veterans who visit Lane’s cafe. There were also enough creepy villains to keep me guessing as to who was the culprit. I had my suspicions, but was surprised at the why and how of it. Deputy Frost is geeky cute, and I’m glad his story is next.

The end was exciting and fast-paced, as all the clues tie together to resolve the murder case. Although this book ended to my satisfaction, I wanted a future peek into Lane and Charlie’s lives. I wasn’t ready to let all the characters go, so I hope to quench my curiosity in book two.

As a debut novel, LIVING LIES hits most of the expectations of this picky reader. The characters are intriguing, casting doubt in all the right places. I loved the depth explored in mental illness, highlighting depression as well as PTSD. It’s novels like this that give hope and understanding to those who are oftentimes misunderstood and ridiculed.

Although some of the situations seemed over-the-top and a little less than believable, it’s because I’m a harsh Romantic Suspense critic. I walk a fine line of love and irritation with the subgenre. That said, the author made me love her style as well as her characters, so my minor quibbles with the story were easily overlooked. Above all else, the characters were not trying to have sex in the middle of hiding from the bad guys, one of my biggest pet peeves. This is a sweet romantic suspense that’s easy to love. All the tension of a thriller without the gory details completes this author’s accomplishment.

I recommend this book to those who love romantic suspense with a small amount of faith reflection. It is beautifully written and inspirational without being preachy. I got teary-eyed in several heartfelt moments. Even those who don’t normally read faith-based novels will enjoy this book’s subtleties.

God bless you, Natalie Walters–your light shines in this debut novel. The world needs more books like this to convince us that evil does not win, and to show us how our own struggles are bravely fought. Books should enlighten and give us relatable characters who make us feel. LIVING LIES is especially good at wrapping the reader in this small town’s embrace while leading by example, hooking us with emotion and hope. Great debut that has me excited for more in the HARBORED SECRETS series: DEADLY DECEIT (November 2019) and SILENT SHADOWS (March 2020).