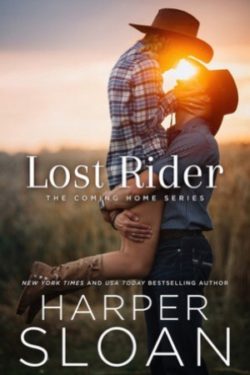 Sloan is a new to me author and I look forward to reading the other books in this series, KISS MY BOOTS, which is due out in July and the third, yet unnamed book, that is scheduled to be released in January, 2018.

LOST RIDER was a quick paced read with a lot of darkness to it.  We learned a lot about Maverick and his siblings, Quinn and Clay and their not so happy upbringing thanks to both their mom and dad’s actions.  Maverick could no nothing right in his dad’s eyes and no one but he and his siblings know how awful his home life was.  But he later learns a secret that even his siblings don’t know and it’s the reason he’s picked on so mercilessly.

Maverick returns home to the family’s Texas ranch after the death of his father.  He only comes home to be there for his siblings however reluctantly he shows up.  Little does he expect to meet up with family friend, Leighton, who he’s been attracted to since he was young but you can’t tell that by any of his actions.  Leighton has always felt the same for him but has closed her heart off for the ten years he’s been gone.  The chemistry is there and boy is it powerful no matter how each of them tries to fight it.  Watching them come to terms with their destiny and how they get there was both heartbreaking and heartwarming. Throw in Clay and Quinn and a family unit is formed or is it?

I loved the way Maverick was trying to give Leigh the space she needed to catch up with the way he feels and how his just being near her rights his world and brings peace to him. I didn’t like the amount of profanity – most of it unnecessary in the telling of the story. There are family and friends, hate and love (they do say one feeling is the flip side of the other), anger, fear, hurt, lots of blushes and tears, laughter, happiness, the PieHole – Lexie’s shop, romance lots of hot loving and love.  The descriptions of the land, the ranch, their dreams, the town and the pies made me feel that I was there. There was nice closure and a happily ever after in the offing but enough loose ends to lead us to Quinn and Clay’s stories.