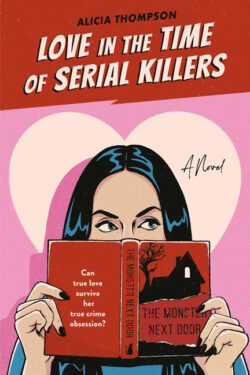 With a title that alludes to a well-written classic and a cute cover, you might think you’d enjoy this book. You might be wrong.

PhD candidate Phoebe Walsh is obsessed with true crime—to the extent that she suspects almost everyone she meets of being a secret killer. She’s writing about the societal effects of serial killers who look normal. But then, what is normal? When her estranged father dies, she heads down to Florida to help her younger brother clean out his house. On her first night there, a neighbor suddenly appears at her elbow, asking if she needs help to remove a huge desk she’d strapped to the roof of her car. She’s startled and immediately assumes nefarious purpose behind his offer, so she declines. But she’s only able to get the desk off the car and leaves it next to her vehicle. The next morning, it’s on her porch. And from such a sneaky, obviously criminal action, she decides that the  admittedly cute neighbor is a killer against whom she must keep up her guard.

Sam Dennings turns out to be a grade school teacher who comes from a big family and is a truly nice man. When he and Phoebe fall into a relationship, Phoebe panics because his niceness doesn’t jibe with her self-image as a lone-wolf who is incapable of loving anyone. Who will prevail?

I’m not a fan of serial-killer aggrandizement, nor do I enjoy true crime stories. But I tried to enjoy this book. Phoebe is just so self-obsessed and one-dimensional. Her parents divorced because her dad was cold and sometimes loudly angry. But her brother, who chose to continue living with him, is an optimistic, lovable young man, eager to ask his beloved to marry him. Phoebe moved with their mom, yet sees herself as unlovable and unable to love. And when Sam shares his loving feelings with her, she hates herself for doing it, but she rejects him before moving away—then throws herself into her work to lessen her depression. I don’t enjoy books where the supposed adults act like spoiled children. And when the story is told in first-person, if you don’t get to like that person, you’ll be hard-pressed to like the story. If you like the serial killer genre with the occasional, often obscure pop-culture reference tossed in, you might enjoy this romance.