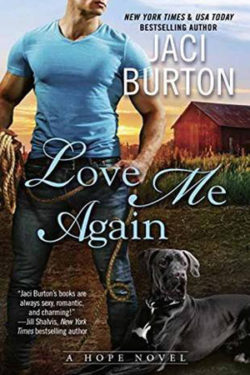 LOVE ME AGAIN is the 7th book in the Hope series.

Loretta Simmons returns to her hometown of Hope, Oklahoma to give her daughter the childhood she dreams of. Loretta’s ex-husband is focused on his political ambitions and has no time to be a father, unless it is for a photo shoot to help his election campaign.   Loretta hopes coming to Hope will allow her daughter to have the fun-filled, carefree childhood every child deserves. Although she is excited to be home, she carries a lot of guilt over how she abruptly ended her romance with Deacon Fox years earlier.

Deacon adored Loretta. When she left him, she truly broke his heart. He heard she moved back to Hope to raise her daughter and vows to keep his distance, but when a construction remodeling job has him working next to her bookstore, it is hard to remain distant. He also meets Hazel, her daughter, who is smart as a whip and needs help trying to control her huge Great Dane pup that has no manners.

Years ago, Loretta allowed her parents to talk her into questioning her love for Deacon. They convinced her she and Deacon were both way too young to be involved. She left Hope to continue her schooling, and eventually they talked her into marrying a man they believed would be the perfect choice for her. When Loretta divorced him, her parents were angry because they believe that when you marry, it is for life. It didn’t matter that Loretta’s husband was cheating on her.

Loretta never explained to Deacon why she left. She owes him the truth and is hoping he can forgive her. More than anything, she has missed their friendship and would love for him to be her friend again.

As the days pass, Deacon realizes he is having fun helping Loretta’s daughter train her dog and helping Loretta fix up the old farmhouse she and Hazel live in. However, what he did not expect was to fall in love with Loretta and her daughter. His dilemma–can he risk his heart again and trust that Loretta will not leave him?

LOVE ME AGAIN by Jaci Burton is a second-chance-at-love story full of wonderful characters and one goofy dog. All the books in this series are stand-alone, but it is great to catch up with characters you met in one of the previous books. Jaci Burton always delivers warm and romantic stories. I wasn’t disappointed reading this, and you won’t be either.