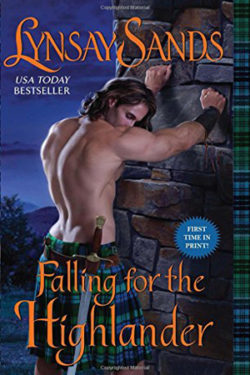 After overhearing her half-brother’s appalling offer to trade her virtue in exchange for horses Lady Murine Carmichael does the only sensible thing left to do – she packs the few items she can and heads out on her own in hopes of reaching one of her friends for help. The last thing she anticipates is running into the very Highlander who’d rejected Lord Danvries’ offer or his refusal to allow her to continue on alone.

Dougall Buchanan can’t deny an attraction to Lady Murine. He’d been enchanted by her while attempting to barter with her half-brother but figured when he’d walked out of the ‘negotiations’ that he’d never see her again.  He certainly didn’t expect to encounter her, riding a cow, to lord only knows where unescorted.

Dougall and the rest of the men accompanying him are quick to ensure that Murine will reach her destination safely, however the venture quickly turns out to be fraught with danger which results in him not letting her out of his sight for very long – not exactly a hardship to his way of thinking.   Lady Murine doesn’t believe Dougall wants her since he did reject her half-brother’s offer, but she couldn’t be more wrong.  Dougall definitely is falling in love with Murine, his first priority is keeping her from harm – and then he’ll worry about convincing her to marry him.

FALLING FOR THE HIGHLANDER is the fourth book in Lynsay Sands’ HIGHLANDER series – and I have to say it’s as good (or better) than the previous books. The characters are vividly depicted and endearing enough to engage the reader’s emotionally.   I really loved watching Murine grow into a self-confident woman unafraid to take on whatever trouble came her way.   She certainly isn’t afraid to make her opinion known when it comes to dealing with Dougall either, but she doesn’t seem to be aware of her own self-worth because of a fainting issue she’s plagued with which is why she believes she came to be a ward of her half-brother.

Ms. Sands’ adds enough background information so that the reader can understand and appreciate the friendship Annabel, Joan, and Saidh share (the heroines in the first three books) even if you haven’t read them yet. Lynsay Sands’ historical novels have become a staple on my keeper bookshelf and they’re titles I find myself drawn to reread over and over.   FALLING FOR A HIGHLANDER has it all – romance, suspense, a determined hero, an even more stubborn heroine, lots of laughs, some tense moments, friendship and as always… the oh-so-satisfying ‘happily ever after.’

While it’s not necessary to read the previous titles in the series to fully appreciate FALLING FOR THE HIGHLANDER I’d recommend doing so (just because they’re great reads).

AN ENGLISH BRIDE IN SCOTLAND

TO MARRY A SCOTTISH LAIRD

THE HIGHLANDER TAKES A BRIDE