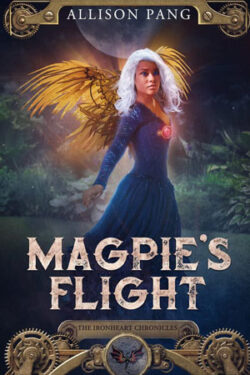 Raggy Maggy, aka Magpie or Mags, is a Moon Child with a special mechanical heart. She has survived being Tithed and spending a harrowing time below in the Pits. Mags accompanies her two friends, Lucian and Ghost, up to Meridion. She plans to help the brothers re-establish their house and to have the Moon Children recognized as citizens. However, Mags experiences a new kind of prejudice and scrutiny. Plus, the city’s elite wants to separate her from Ghost. Can Mags rescue Ghost from a forced political marriage? And what role does her heart play for the city of Meridion?

Ghost, formerly known as Trystan d’Arc, is the youngest son of Meridion’s creator (and later its betrayer). He is also a Moon Child. Ghost and his brother need to restore the d’Arc House before they can help Mags fight for the Moon Children’s rights. However, he finds himself trapped in an unwanted marriage negotiation with a powerful house. Can Ghost or his brother find a way out of the betrothal without jeopardizing their house? Or will he be forced to sacrifice himself for Mags and the Moon Children’s cause?

Mags continues to be a remarkable yet conventional heroine. She has endured such incredible hurdles without losing her sense of self. I admire Mags’ determination to establish the Moon Children as citizens. She believes they are owed those rights because of the many injustices and horrors dealt to them throughout the years. What I adore the most about Mags is how she includes Ghost as a true Moon Child. She recognizes that he is special to her, and Mags refuses to allow Meridion or its people use him as a political pawn.

Ghost is a young man divided by two sides. He does not exactly belong to the Moon Children or the Meridions. I adore Ghost’s intentions on helping Mags and the Moon Children. He has spent time in their world, and he has seen how cruelly they have been treated. Ghost wants them to be elevated in status with the basic rights humans of any kind deserve. I only wish we got more of his point-of-view in the story. I understand Mags is the main character, but Ghost plays an important role in her life.

MAGPIE’S FLIGHT is the third and final book in Allison Pang’s dystopian, steampunkish series, THE IRONHEART CHRONICLES. I highly recommend reading the previous two books before jumping into this one. It is best to start from the beginning to understand and appreciate the author’s fascinating world-building. This story picks up where the second one basically leaves off. I like how the author finally explores Meridion and its citizens in this book. It has been heavily mentioned throughout the first two novels. I especially like how their way of life greatly differs from BrightStone’s people.

MAGPIE’S FLIGHT is the thrilling conclusion to a phenomenal series. I am bummed that this series has come to an end. It has been an incredible ride. I did hear that the author may consider writing side and short stories for this world. I am totally behind this!