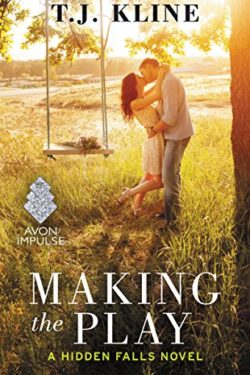 When football player Grant McQuaid is sidelined due to injuries, he returns to his hometown of Hidden Falls to recuperate. While exercising by playing football with his brother in the park, he meets a young hearing impaired boy, who claims to be his fan. Grant’s weakness is small children, like James, who have illnesses to overcome. His coach is big on giving back to the community and whenever Grant and his fellow players are in town, they volunteer. For Grant, this means visiting the children in the hospital.

Being a single mother is hard enough, but Bethany Mills is also her hearing impaired son’s teacher. Her husband walked out on them when her son James was two months old. Fortunately, her parents helped her as she returned to college to gain her teaching degree. She and James left her parents in Tennessee, at her mother’s suggestion, to start a new life. Now her world centers on her adorable son and she has no intention of dating. After all, she doesn’t want James to get close to another man only to have him walk out on them too. When she meets Grant, she is a bit star struck, but seeing the interest in his eyes cools her ardor. Football players are away too much and would only disrupt her son’s life. But this doesn’t quiet the longing she feels within her whenever Grant is near.

Grant has never wanted anything but to play football, until he meets Bethany. Now that he has been sidelined and there is a risk that he won’t be able to return to play, he has some choices to make. He has received offers of positions that will still keep him involved in football, but they will take him out of town. Will he choose his longtime love for football or the woman who has stolen his heart?

A heartfelt tale, MAKING THE PLAY, the first novel in author T.J. Kline’s HIDDEN FALLS series, is a heartwarming, sexy contemporary romance that will lift your spirits. Bethany has put the idea of romance behind her after being hurt by her husband, but she can’t help the way Grant makes her feel. Not even her husband affected her this way. As Bethany observes James with Grant, she begins to realize that there is a void in her son’s life that she can’t fill and slowly opens herself to dating once more. As for Grant, he longs to return to football, but the more time he spends with Bethany and James, the more his priorities shift. All three characters are very engaging and I could not help rooting for them to become a family.

Ms. Kline does an admirable job of balancing a mother’s need to protect her child with that of instilling him with the traits to make him a caring human being and not spoiling him. James is such a likeable little boy who takes his condition in stride, so much so that readers will find themselves losing their hearts to him. There are some very special moments in the story that will touch your heart. The secondary characters were also engaging and though I hated to see this story end, I look forward to reading the next installment of HIDDEN FALLS. This emotion-packed tale is a must read for fans of contemporary romance!