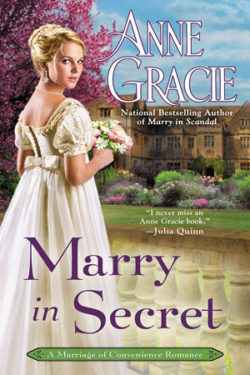 Rich in history and mystery, MARRY IN SECRET, the third book in the A Marriage Of Convenience series, is a sincerely addictive, in love with romance, story. It stars Lady Rose Rutherford, a rambunctious, ravishing lady who weds a naval officer in a quiet ceremony as a teenager before he leaves with the Royal Navy. A couple weeks later, Rose learns his ship sank and there weren’t any survivors. Stunned, she never tells anyone and mourns her husband, Thomas Beresford, in silence. Now, years later on the day she is to marry the Duke of Everingham, a filthy man runs into the church shouting to stop the wedding. Who is this man? It’s Thomas and he is very much alive! Where has he been all this time?

Thomas Beresford, a tough, bitter, handsome man with a mission discovers that his wife, Rose, who he hasn’t seen in years is about to wed. Thomas needs money to accomplish something important but he dearly loves Rose. After the horrors of the past four years he is a changed man and agrees with Rose’s family to get an annulment. Only, Rose still loves him and wants to honor her vows. Rose is determined to set things right and convince her brother she still is in love with Thomas. Her family is wary of him and his intentions. Will Thomas convince them he is honorable? Does Rose chink into Thomas’ cold hard shell honed from years of abuse with her true abiding love?

MARRY IN SECRET is a dramatic romantic masterpiece about the horrors of war and the emotional scars men and women have to overcome. Ms. Gracie masterfully pens a tale of a heartfelt romance on how true love transcends time. Warm family nuances and mysterious interlopers are finely woven into a romantic tale of men lost at sea and a grief stricken heiress with a huge secret. Ms. Gracie’s novels are always so emotional, comical and spectacular. I adore Rose and her brave personality. She is a free spirit and willful but has a charming personality that I love. The author threw in a lot of curve balls into this intricate plot. There is mystery, a person bent on revenge, humor, and a hard won romance. This is simply a stunning story! MARRY IN SECRET is superbly dazzling, daring and charming. Historical romance at its best!