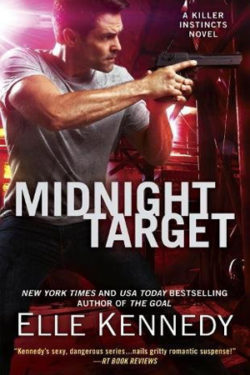 MIDNIGHT TARGET by Elle Kennedy is the last book in the Killer Instincts book series, and I am more than a little sad to see the end. I have read every book and have enjoyed the heart-stopping, suspenseful, roller coaster ride I have been taken on.

This book focuses on two romances. Cate is the daughter of Jim Morgan, who operates Morgan’s Mercenaries. She was raised by her grandfather, a cruel man who used her for his own gain. She did not know her father was alive until the day he rescued her from her grandfather’s home. Jim Morgan loves his daughter but wants to wrap her in a plastic bubble. She was horribly treated by her grandfather, and he doesn’t want her to be hurt again. He will do anything to keep her safe.

Cate has been in love with Ash, one of her father’s employees, since her teen years. Ash has been a good friend and confidant to her and has helped her work through her many issues with her father. She does not want to be protected from the world. She wants to experience life, but her father wants her to be wrapped in cotton and kept out of harm’s way. This is not the life she wants, so she leaves home to work as a photojournalist in some of the most dangerous places in the world.

Ash has always had feelings for Cate, but out of respect for her father, he refuses to allow himself to take things any further, even though she is now an adult. He is a mercenary, and she deserves more than being with someone like him.

While on assignment, Cate innocently takes a picture of someone who is supposed to be dead. Someone dangerous. Someone who will do anything to make certain nobody knows he is alive. Cate is not certain the man she has photographed is really the head of a drug cartel. He was killed, or at least, that’s what was reported. She needs confirmation before breaking this major story so uses her various contacts to ensure the person in her picture is who she suspects he is.

The next thing she knows, gunfire is erupting throughout her hotel, and the journalist she has been working with has been shot and killed. It is only because of the personal protection training she received from her father and Ash that she is able to escape.

From here on out, the action continues, and things get more dangerous. However, Cate is not the only one in danger. The cartel does not hesitate to go after her family and the families of the men and women who work for her father and his wife.

The men in this series are ultra alphas. The women are incredibly strong and easily stand toe to toe with these men. While each of these books can be read as stand alone, I would recommend they be read in order. As you get introduced to each character and read their back story, you realize what drives them to do the jobs nobody else will do. This book also finally addresses the relationship between Liam and Sully. I was so happy with the ending for them.

Elle Kennedy is a master at writing suspense, action, and very hot sex.  I am so looking forward to seeing what adventure she takes me on next.