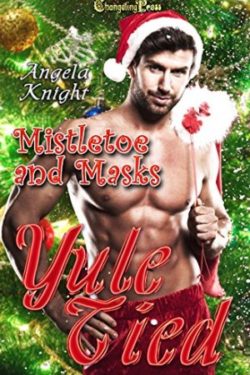 For the past year Hyper Lock, AKA Luke McKellen and Ultra, AKA Nikki Moss have been a force to be reckoned with as a crime fighting duo. Like any policing unit, the superhero team has a special connection that allows them to often work together without second guessing each other.  The only trouble is that Ultra has an industrial size crush on Lock, and while Lock is attracted to her, he’s certain that she’s not submissive and would never submit to him.  The woman caught a 10-year-old kidnapped child in midair and then flew off with her abductor like he weighed nothing – a woman like that wouldn’t need or want a man to take control… would she?

Angela Knight never fails to thrill me with her unique characters, laugh out loud dialogue, sexy plot twists, and memorable storyline. First off, Lock and Ultra aren’t just superhuman, they’re humans inhabited by aliens which lend them their powers (but as freaky as that sounds, even the aliens are cute little buggers who genuinely care about their hosts).   I genuinely adored Lock and Ultra and loved how they took down the ‘Santahole’ (a Hyper rogue dressed as Santa who received his alien symbiont illegally) while saving the little girl, Jamella.  MISTLETOE AND MASKS is a fun, fast paced read that teases the imagination and leaves you smiling at Lock and Ultra’s romance.