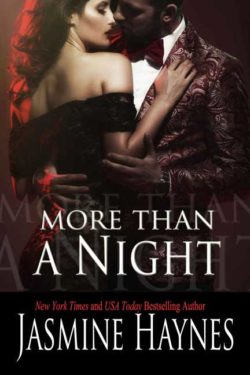 Jasmine Haynes’s West Coast Novel, MORE THAN A NIGHT, is amazing. Justine Jarreau has been estranged from her father for almost twenty years, but all that changes after a one-night stand with Lucas Falconer, who turns out to be the stepbrother she never knew she had. He’s come to bring her home after her father has had a heart attack. He was told Justine abandoned her father and the family vineyard.

The next morning Lucas breaks the news to Justine about her father. She’s distraught and angry at how Lucas has treated her. She races to her father’s side, desperate to see him. She is determined do anything to heal their rift except bend to her father’s will, or any man’s will, including Lucas Falconer, no matter how attractive she finds him.

In the past, Justine’s father tried to force her to marry a man she didn’t love, and when she refused, he disowned her. Now he’s trying to do it again. Even though she finds Lucas incredibly attractive and heat sizzles between them, she is her own woman and she refuses to let any man treat her as less than that.

What I like most about Justine is even though the men in her life think they know what’s best for her, she listens to her heart and does what she thinks is in her own best interest. Rather than run away this time, she faces her father, determined to be her own woman. And she finds the one man who will support her—Lucas.

A really good read and I highly recommend it.