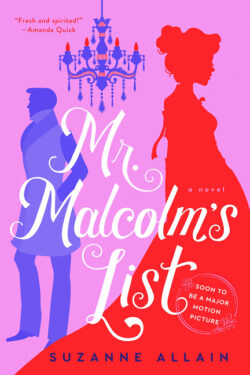 MR. MALCOLM’S LIST is a historical romantic comedy set in Regency England in 1818. There’s a comedy of errors that is set in place by Julia, a young woman who felt snubbed by the Honorable Jeremy Malcolm after one date to the opera. She insists her old school friend should come to visit and help in her quest to put Jeremy in his place. Selina, the daughter of a country vicar, decides to go along with Julia’s plan and ends up staying in London.

The plan to have Selina embarrass Jeremy falls short when the two unexpectedly meet and hit it off. Julia then turns to his best friend, who happens to be her cousin, to get insider information about Jeremy, and her need to get revenge on Jeremy becomes a single-minded aim with disastrous and humorous consequences.

The characters often seemed shallow, and I didn’t always like their behaviors or Julia’s plotting. But the addition of Jeremy and Selina’s family members is a nice touch to add some normalcy to the story. MR. MALCOLM’S LIST is a rollicking adventure filled with jealousy, tested friendships, and ultimately love. There are several happily ever afters in the works, but the story ends abruptly.

A fun if at times frustrating read about characters who need to mature, but with a few who do fall in love with a satisfying conclusion.